1)  ἀναδείκνυμι occurs only twice in the GNT, that's hardly enough evidence to make a firm decision on its potential relevance to Christology.

2) If you'll notice, each occurrence apparently has a different sense, one from the other. How it's used in Luke is not how the word is employed in Acts.

3) Let's say that Luke uses ἀναδείκνυμι to delineate Jesus' activity in his Synoptic Gospel. Does that mean he couldn't apply the word to the Father in Acts 1:24? That would be like saying that because God loves humankind and Jesus loves humankind, therefore Jesus must be God. Yet performing the same action does not necessarily place two entities on level footing as shown by the fact that Gabriel could love humankind too; however, that would not make Gabriel ontologically equal to Jehovah.

4) Jesus is clearly not the referent of Acts 15:8, but God is. It makes better sense to apply Acts 1:24 to the one clearly described as the knower of hearts by Luke. Moreover, see the prayer in Acts 4:24-31. The Father is addressed as "Sovereign Lord."
Posted by Edgar Foster at 10:52 AM 8 comments:

Generally speaking, the claims of the Trinity doctrine are:

Version A.
1. The Father is God.
2. The Son is God.
3. The Holy Spirit is God.
4. There are three divine Persons.
5. Each divine Person is distinct from the other Persons.
6. There are not three gods, but only one God.

Another way to frame the Trinity doctrine is to say:

Are these claims contradictory? What do you think? Have I framed them correctly? Finally, does the Bible teach either one of these concepts (version A or version B)?

Anyone replying to this post needs to stick with the point of this thread or comments will not be accepted. Let's stick with the subject matter, please.

I. Howard Marshall (Acts in Tyndale NT Series): The real choice, however, was left to the Lord, since apostleship is not a humanly ordained office. The assembly, therefore, prayed that he would exercise his choice in virtue of his knowledge of men’s hearts (cf. 15: 8 and especially 1 Sam. 16: 7). It is not clear whether God the Father or Jesus is addressed in the prayer, but in view of the fact that in 1: 2 the same verb is used of Jesus choosing the apostles, it is more probable that he is addressed here.

F.F. Bruce (NICNT): The prayer is couched in dignified language, with liturgical echoes.⁸⁰ The question whether the “Lord” to whom it is addressed is God the Father or the Lord Jesus is probably settled by the fact that the same verb is used in verse 24 (“thou hast chosen”) as in verse 2 (“the apostles whom he [Jesus] had chosen”).⁸¹ The same Lord who had chosen the apostles at the beginning of his ministry would choose this replacement for Judas.

Show us the one whom thou hast chosen (αναδειξον ον εξελεξω). First aorist active imperative of αναδεικνυμ, to show up, make plain. First aorist middle indicative second person singular of εκλεγω, to pick out, choose, select. In this prayer they assume that God has made a choice. They only wish to know his will. They call God the

heart-searcher or heart-knower (καρδιογνωστα, vocative singular), a late word, here and Ac 15:8 only in the N.T. Modern physicians have delicate apparatus for studying the human heart.

NET Bible agrees with Bock on translating the aorist participle in Acts 1:24: see the reference in BDF. Notice that Bock departs from two of his peers, and I would like to see what Craig Keener thinks about this verse.

Eckhard J. Schnabel (ZECNT Commentary on Acts): 1:24 They prayed, “Lord, you know the hearts of all people; show us which one of these two men you have chosen” (καὶ προσευξάμενοι εἶπαν· σὺ κύριε καρδιογνῶστα πάντων ἀνάδειξον ὃν ἐξελέξω ἐκ τούτων τῶν δύο ἕνα). The assembled believers turn to God when the time has come to decide between the two candidates for the position of the twelfth apostle. Their ongoing prayers (cf. 1:14) turn to a specific decision that must be made—a decision that in this case they cannot make on their own initiative, relying on their own wisdom.
The address “Lord” (κύριε) may refer to Jesus, described in v. 2 as the one who had chosen the apostles and called “Lord Jesus” in v. 21. More likely the believers address their prayer to God, as he is called “God, who knows the human heart” (ὁ καρδιογνώστης) in 15:8, a title that reflects the Old Testament teaching about God’s knowledge of the thoughts and motivations of the individual and about his foreknowledge. The choice of who belongs to the Twelve can be made only by God, not by the assembled believers, as the original group of the twelve disciples had been made up not of volunteers but by men selected by Jesus. Thus the believers pray that God will reveal his choice.

Richard I. Pervo (Hermeneia Commentary on Acts): The prayer has formal elements that would
become standard in the liturgical “collect”: address, ascription, and petition.54 The petition is grounded
in the attribute “knowledge of human hearts.”55 Does “Lord” here refer to God, as in 15:8, or to Jesus, as in v. 2? The former appears more probable.56 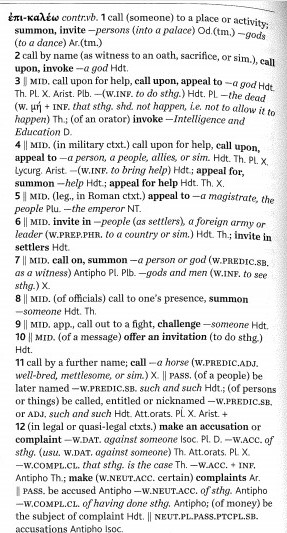 Five Books I Tried to Read Over the Summer: Almost Done!

Okay, I didn't quite meet my goal, but I came close. Now I'm finishing one of them.

To be honest, this is my least favorite book in the bunch. The work contains some insights from a notable form critic, but overall, I do not like his approach to the Elijah narratives.

A good overview of different biblical-theological models. This book clarified the concept of biblical theology for me.

I enjoyed this book and it was informative; however, the work has numerous typos and they sometimes distract from the overall reading experience. The work also is a revised dissertation.

I love this book: if you're into studying how history as a discipline should be carried out, this is the book for you. One downside might be that some of the material could be dated.

Very passionately written, but at times, inconsistent and tendentious. The book might come off elitist to most who read it, and may suffer from the current Zeitgeist in which multiculturalism and pluralism reign supreme. However, Simmons provides some interesting details about the development of the humanities in the West and the book tries to make a case for preserving and teaching Latin and Greek.

My experience has been that most commentators writing today, even if they're Trinitarian, don't view Mark 5:6 as an example of worship or adoration. I've posted material from the NET Bible and Ralph Earle previously, but here's another scholar who takes the position that Mark 5:6 is not an example of Jesus receiving worship:

Robert A. Guelich (WB Commentary on Mark 1-8:26): Seeing Jesus “at a distance” (καὶ ἰδὼν . . . ἀπὸ μακρόθεν), he “ran” (ἕδραμεν) and “bowed” (προσεκύνησεν) before him. This verse resumes the action of 5:2 by describing in greater detail the encounter between Jesus and the possessed man. Yet this encounter hardly sets the stage for conflict or a struggle (cf. Robinson, Problem, 83–86). The man not only takes the initiative but does so as though urgently drawn by Jesus (cf. 1:23). Certainly, his “bowing,” though most likely not an act of “devotion” (so Lohmeyer, 95), betrays his recognition and acknowledgement of Jesus as his superior (cf. 3:11). And this submissive gesture of recognition stands in stark contrast to the previous description of one totally uncontrollable (5:3–4) and accents Jesus’ power to do what none before had accomplished.