I believe that the ante-Nicene Fathers (as well as the post-Nicenes) generally accepted the historical validity of the Noachian Flood:

"In the ninth generation are born the giants, so called from of old, not dragon footed, as the fables of the Greeks relate, but men of immense bodies, whose bones, of enormous size, are still shown in some places for confirmation. But against these the righteous providence of God brought a flood upon the world, that the earth might be purified from their pollution, and every place might be turned into a sea by the destruction of the wicked. Yet there was then found one righteous man, by name Noah, who, being delivered in an ark with his three sons and their wives, became the colonizer of the world after the subsiding of the waters, with those animals and seeds which he had shut up with him" (1 Clement 29).

In Refutation of all Heresies 26, Hippolytus also
maintains:

"And in Noah's time there occurred a flood throughout the entire world, which neither Egyptians, nor Chaldeans, nor Greeks recollect; for the inundations which took place in the age of Ogyges and Deucalion prevailed only in the localities where these dwelt. There are, then, in the case of these (patriarchs-that is, from Noah to Heber inclusive)-5 generations, and 495 years."

Moreover, in a work of Theophilus, we read:

"But Moses, our prophet and the servant of God, in giving an account of the genesis of the world, related in what manner the flood came upon the earth, telling us, besides, how the details of the flood came about, and relating no fable of Pyrrha nor of Deucalion or Clymenus; nor, forsooth, that only the plains were submerged, and that those only who escaped to the mountains were saved" (To Autolycus 3.18-19).

The quotes that illustrate the beliefs of the ante-Nicenes regarding the Noachian Flood are many. It appears safe to say that the Fathers generally thought it was a historical event. However, this does not mean that the account could not be read on other exegetical levels. For instance, Cyprian argues that anyone who does not have the church for his mother cannot have God for his Father. He then uses the account of Noah to explain the salvific or soteriological role of the church in the outworking of God's eternal purpose through Christ Jesus:

Augustine of Hippo later employs the biblical narrative of Noah and applies it to the church. He likens the clean and unclean animals taken into the Ark to defiled and undefiled persons in the Christian ecclesia. For Augustine, the church is a corpus permixtum: a body composed of different types of persons until Christ does the separating work. However, Augustine thought the Flood was an historical event as did the ante-Nicenes. Interestingly, Origen's interlocutor Celsus, also charged Christians during his time with distorting Greek flood stories by using the biblical account of Noah.
Posted by Edgar Foster at 11:34 AM No comments:

"Having come in the flesh" represents a fairly literal rendering of the perfect participle in 1 John 4:2.

I notice that J.B. Rotherham also translates the verse:

"Hereby do ye perceive the Spirit of God:--

Posted by Edgar Foster at 2:01 PM No comments: 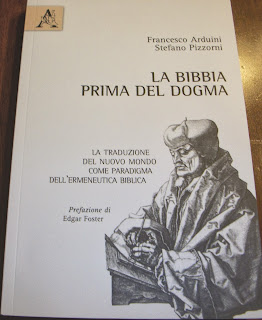 Posted by Edgar Foster at 12:11 PM No comments:

Documentary Hypothesis and the Margins of Scholarship

The Documentary Hypothesis teaches that the Pentateuch arose from four distinct sources known as JEDP (the Jahwist, Elohist, Deuteronomic, and Priestly source). The J document is usually given a 9th century date, the E source is believed to be an 8th century source, whereas D is attributed a 7th century date and P is considered a 6th century source.

"The Documentary Hypothesis claims that the Pentateuch is a composite of four separate, complete, and coherent documents." See http://imp.lss.wisc.edu/~rltroxel/Intro/hypoth.html

One point that interests me for now is how dogmatic that proponents of this view have been or continue to be. Furthermore, the Documentary Hypothesis is a lesson in how certain scholars get pushed to the margins if they do not follow the status quo. Tremper Longman III and Raymond B. Dillard relate the story of Franz Delitzsch, who apparently was pushed to the margins of scholarship because he did not accept the Documentary Hypothesis. While I understand the need for the scholarly guild to protect academic biblical studies from "loony" and unsupported ideas, it's somewhat disturbing that scholars have made the Documentary Hypothesis (a very speculative endeavor) a touchstone for who can have a voice in the biblical scholarly world and who cannot. That view strikes me as conformist to the utmost degree.

I am reminded of ancient controversies that used force instead of persuasion to shut "heretics" down; and one can't help but think of Martin Werner, whose views on Christ qua angel were intensely criticized by Wilhelm Michaelis. Werner never recovered from the latter's analysis. See https://www.academia.edu/2202637/Reconsidering_and_Aspect_of_the_Title_Kyrios_in_Light_of_4Q416_2_iii

You can believe what you want to believe in academic biblical studies, so long as your view harmonizes with the prevailing orthodoxy.
Posted by Edgar Foster at 2:35 PM 2 comments:

1) While it may be tempting to deny that birthdays are rooted in superstition, magic and pagan religious customs--almost everything I read backs this idea. People (in general) evidently began celebrating birthdays in order to keep away bad spirits. Granted, not every culture has the same practices for birthdays or how to observe Christmas (etc). That's an understatement. But I'd like to see an early culture that observed birthdays for non-religious or non-superstitious reasons. I have not found one yet.

2) Ancient Jews and Christians roundly condemned the observance of birthdays at one time. Origen is a famous example: he wrote that not one "saint" (holy person) observed a feast on the day of his birth. Furthermore, Clement of Alexandria spoke ill of those who speculated about the Savior's day of birth. See John Davidson, The Gospel of Jesus: In Search of His Original Teachings, page 131. Another patristic writer who spoke against birthdays was Arnobius of Sicca; see Adversus Gentes 7.34. It's also possible that Philo condemned birthdays while we know that Josephus did.

"Nay, indeed, the law does not permit us to make festivals at the birth of our children, and thereby afford occasion of drinking to excess" (Josephus. Translated by W. Whiston. Against Apion, Book II, Chapter 26. Extracted from Josephus Complete Works, Kregel Publications, Grand Rapids (MI), 14th printing, 1977, p. 632).

One writer examines both sides of the issue from a Jewish perspective, but it seems that all of his examples to uphold the celebration of birthdays are late, since they date from the 4th cent. CE onward. See http://louisjacobs.org/library/articles/birthday-celebrations.php

3) To my knowledge, wedding rings did not originate from pagan religious sources. I read an article on this point years ago, but would be happy to see additional research on the matter. I choose not to wear a wedding ring anyway, but not for religious reasons. It's a matter of conscience IMO.

4) On circumcision, we have two issues at play. What are its origins and why did God command Abraham to do it? Scholars point out that the issues surrounding circumcision are more complex than the subject may first appear. There's no necessary B-line from Egypt to Israel as far as circumcision is concerned; secondly, it's far from clear that the Egyptians started practicing circumcision because of religion.

In a journal article, "Circumcision in the Ancient Near East," Jack M. Sasson argues that it's very unlikely the Israelites or Phoenicians adopted circumcision from the Egyptians. After reviewing some archaeological evidence from Egypt, he reports: "Thus one can note a basic difference between the Israelites and the Egyptians in the surgical process involved in circumcision. Whereas the Hebrews amputated the prepuce and thus exposed the corona of the penis, the Egyptian practice consisted of a dorsal incision upon the foreskin which liberated the glans penis. The Old Kingdom reliefs at Saqqara clearly demonstrate the results obtained by the Egyptian surgeon." See JBL 85 (1966): 473-76.
Posted by Edgar Foster at 3:10 PM 25 comments: