The Holy Angels of God

(both quotes are taken from the ASV)

"The inclusion of the elect angels is unusual and serves to intensify the solemnity of the charge. Elect may either refer to the angels as the chosen ministers of God who carry out his will (Bernard) or serve as a contrast to the fallen angels (Kelly), probably the latter, given the context of judgment" (Fee, Gordon. 1 and 2 Timothy, Titus. P. 131).

When Jesus speaks of TWN AGGELWN TWN hAGIWN in Mark 8:38, he evidently means that the angels are "holy, set apart, sanctified, and consecrated" to God (Zodhiates). While we want to avoid what James Barr called "illegitimate totality transfer," I think that the aforementioned definitions of hAGIOS overlap with one another. The lingual sign HAGIOS points to the faithfulness and sinlessness (IMHO) of God's loyal angels. This holiness is derived, however, and not self-caused as is the holiness of God.

In the Similitudes, we also read:

"But you, having been strengthened by the HOLY Angel,and having obtained from Him such intercession, and not being slothful, why do not you ask of the Lord understanding, and receive it from Him?" (Sim. 5.4.2)

Thus, even in the patristic writings, the angels are recognized as being "holy."

and a little child shall lead them;


become through the grace of God so tractable, that they shall be led, guided, and governed by the ministers of the Gospel, Christ's babes and sucklings, to whom he reveals the great things of his Gospel, and out of whose mouths he ordains praise. Bohlius interprets this little child of Christ himself, by whom they should be led and directed, see ( Isaiah 9:6 ) and the following passages are referred to the times of the Messiah by the Jewish writers; and Maimonides in particular observes, that they are not to be understood literally, as if the custom and order of things in the world would cease, or that things would be renewed as at the creation, but in a parabolical and enigmatical sense; and interprets them of the Israelites dwelling safely among the wicked of the nations of the world, comparable to the wild beasts of the field. (This verse may apply to the future state when all things will be restored to their original state before man fell. By Adam's sin, death and bloodshed were introduced into the creation. ( Romans 5:12 ). In the final state these will be removed and the wild nature of animals become tame. Editor.)

Interesting thought. Scholars debate whether the description in Isaiah is symbolic or literal.

Posted by Edgar Foster at 7:57 AM No comments:

Another Dissertation on The Johannine Comma

It's a doctoral thesis that is under embargo until 8-15-2013. So there's limited access for now.

Is It Possible for a Unipersonal Being to Love Himself?

My response to Trinitarians who argue that since God is eternally love, he must be triune is the command quoted in Mt 22:39, namely, "You must love your neighbor as yourself."

I concede that God did not become love but IS love eternally [or everlastingly] (1 Jn 4:8): love is Jehovah's essence or nature, as the "Draw Close to Jehovah" book points out. Ergo, why can't a non-created unipersonal being, who is everlasting love, love Himself prior to loving anyone else? If the unipersonal God of the Bible has
always loved Himself, then He has supremely loved the One who is worthy of being supremely adored.

And if I can become a (quasi) object by conducting a rationally inward form of discourse with myself, then why can't the unipersonal God of the Bible make Himself the supreme object by loving Himself as He loves others whom He has created? It seems to me that before I direct my affections toward a particular beloved entity (i.e. an external and
alterior personal object like my son or wife) in a scripturally proper way, I must first have proper love for myself.

I will now post what I have found concerning the syntax of 1 Peter 4:14:

Most works that I've referenced focus on the two occurrences of the definite article TO in this passage.

This book on Greek syntax suggests the rendering, "The Spirit of glory and the Spirit of God rests upon you."

Norman Hillyer (1 and 2 Peter, Jude, p. 135) thinks that the construction TO THS DOXHS KAI TO TOU QEOU PNEUMA is an example of hendiadys that should be rendered, "the glorious divine Spirit." Hillyer also believes there is a clear example of hendiadys in 1 Pet 2:25. Most works that I've consulted, however, do not construe the syntax in 1 Pet 4:14 as Hillyer does.

"After DOXHS a considerable number of witnesses, some of them early, read KAI DUNAMEWS. The words are suitable to the context, but their absence in such diversified witnesses as P72 B K Psi 049 330 Tertullian Ephraem Cyril Fulgentius al, and the fact that those that have the addition present it in somewhat different forms, sufficiently condemn all of them as homiletic supplements to the original text" (A Textual Commentary on the GNT, p. 624-625).

A. T. Robertson (A Grammar of the Greek NT, p. 767) notes that when Peter writes TO THS DOXHS, it is an elliptical construction, in which PNEUMA is to be understood (i.e. "the spirit of glory").

One other thought that occurred to me is the likelihood that the construction in 1 Pet 4:14 that we've been discussing is a genitive of apposition.

Concerning the genitive of apposition, Richard A. Young writes:

1 Peter 4:14 could be a genitive of apposition. I'd be willing to entertain any opposing views, however.

In answer to my challenge, someone wrote:

Nevertheless, I no longer think that 1 Pet 4:14 might be a genitive of apposition in view of the way Peter no doubt utilizes KAI in the text. KAI is probably ascensive here.

Posted by Edgar Foster at 8:50 PM No comments:

One Link to My Dissertation: Metaphor and Divine Paternity

Edgar
Posted by Edgar Foster at 9:40 AM No comments:

Description: This study investigates the literary and theological context of Deuteronomy 32, 1, 8, and 14 (in that order) where the fatherhood of God is revealed. Subsequently, it discusses the structure and genre of each chapter. Finally, it analyzes the verses in their context that speak of God as the father of Israel (Deut 32:6, 18; 1:31; 8:5; 14:1-2).

Chapter 4 logically begins with Deuteronomy 32, for there it reveals Yahweh as the progenitor of Israel. Moreover, it is the only occurrence in Deuteronomy where the word "father" is used metaphorically for Yahweh. Deuteronomy 1 reveals Yahweh as caregiver , as he is compared to an earthly father carrying his son. Deuteronomy 8 continues the caregiving theme in the form of Yahweh disciplining Israel for their refinement and for their good. Deuteronomy 14 presents Yahweh's fatherhood as covenant partner .
Posted by Edgar Foster at 9:36 AM No comments:

For since there are real men, so must there also be a real establishment (plantationem), that they vanish not away among non-existent things, but progress among those which have an actual existence. For neither is the substance nor the essence of the creation annihilated (for faithful and true is He who has established it), but the fashion of the world passes away; that is, those things among which transgression has occurred, since man has grown old in them. And therefore this [present] fashion has been formed temporary, God foreknowing all things; as I have pointed out in the preceding book, and have also shown, as far as was possible, the cause of the creation of this world of temporal things. But when this [present] fashion [of things] passes away, and man has been renewed, and flourishes in an incorruptible state, so as to preclude the possibility of becoming old, [then] there shall be the new heaven and the new earth, in which the new man shall remain [continually], always holding fresh converse with God. And since (or, that) these things shall ever continue without end, Isaiah declares, For as the new heavens and the new earth which I do make, continue in my sight, says the Lord, so shall your seed and your name remain. And as the presbyters say, Then those who are deemed worthy of an abode in heaven shall go there, others shall enjoy the delights of paradise, and others shall possess the splendour of the city; for everywhere the Saviour shall be seen according as they who see Him shall be worthy.

Posted by Edgar Foster at 8:14 AM No comments:

John 20:28 is a controversial passage that has been explained in a sundry and diverse ways. The brilliant exegete Theodore of Mopsuestia (one who affirmed Christ's Deity) felt that John 20:28 was not addressed to the Son, but to the Father of our Lord and Savior. Of course his approach was condemned in 553 C.E. and does not have wide acceptance today, though it is certainly a probable view at the very least.

Frankly I have no problem with calling Jesus KURIOS or QEOS. Yet this doesn't mean that Jesus is Almighty God. In Col. 1:15, 16, human and angelic rulers are called KURIOTHTES. Acts 2:36 also tells us that Christ was made KURIOS--he was not always such. Yes, he was QEOS in his pre-human existence, but I think that John makes a vital distinction between the Almighty hO QEOS and the one who was QEOS (without the Greek article).

Scholar J. Gwyn Griffiths writes that QEOS in Jn 1:1c, "Taken by itself" could be rendered "And the Word was (the) God" or "and the Word was (a) God" (See "The Role of Theology and Bias in Bible Translation" by Rolf Furuli). Many students of the early fathers also know Origen thought that God with the article denotes something different than God without the article in Jn 1:1c. 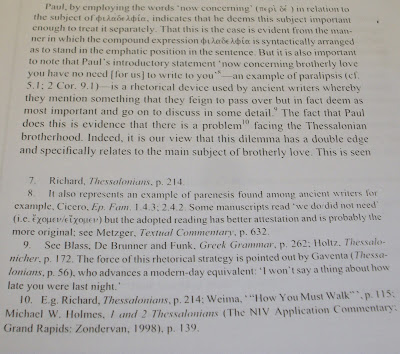 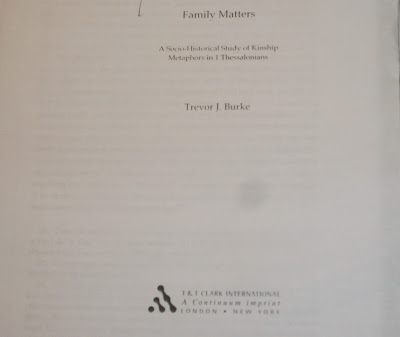 Posted by Edgar Foster at 2:51 PM No comments:

New Master of Theology Dissertation on the Johannine Comma (1 John 5:7)

Free download, but it's written in Greek. The author is Pavlos D. Vasileiadis.
Posted by Edgar Foster at 1:11 PM No comments:

Paraleipsis (Paralipsis) in Scripture by Koester

These comments from Craig R. Koester might be useful where the conscription of rhetoric in the Bible is concerned. The Greek construction upon which he remarks is περὶ ὧν οὐκ ἔστιν νῦν λέγειν κατὰ μέρος(Hebrews 9:5):

"The author concludes his description of the furnishings [of the Tabernacle] by commenting that he cannot deal with these things in detail (cf. 11:32). Rhetorically, passing by something without detailed comment was called PARALEIPSIS (Rhet. ad Her. 4.27 Sec. 37' Lausberg, Handbook SS 882-886). By identifying some aspects of a large topic while refusing to make detailed comment, the speaker alludes to his familiarity with the subject matter, while relativizing its importance. Here, Hebrews makes clear that what is most important is not the sanctuary, but the ministry that takes place within it" (Hebrews: A New Translation with Introduction and Commentary. Anchor Bible Commentary. New York: Doubleday, 2001), 404.

Posted by Edgar Foster at 7:05 PM No comments: