Notes on Slavery in the Ancient World

Speaking about slavery in the ancient world: "A slave was property. The slaveowner's rights over his slave-property were total, covering the person as well as the labour of the slave" (Peter Garnsey, Ideas of Slavery, 1).

Albert Bell observes that the treatment of a slave in antiquity depended on the individual master. For instance, while Pliny says that he treated his slaves in a humane manner, Seneca castigated other Roman masters for the cruel treatment they regularly meted out to their slaves. The writings of Juvenal and Martial also indicate that slaves were generally not accorded humane treatment in the New Testament world. Nevertheless, it seems that Stoicism and Christianity did cause the Romans to recognize the humanity of their slaves: these movements altered their view and behavior toward slaves.

The Stoic philosopher named Epictetus was born a slave, but he was set free after Emperor Domitian banished philosophers from the Italian peninsula. See http://plato.stanford.edu/entries/epictetus/
Posted by Edgar Foster at 9:12 PM 4 comments:

Translation (ASV): He that hath an ear, let him hear what the Spirit saith to the churches. To him that overcometh, to him will I give to eat of the tree of life, which is in the Paradise of God.

Ian Paul (Revelation: An Introduction and Commentary): Just as the opening appellation of Jesus draws from some aspect of the vision in Revelation 1, so these final promises anticipate some aspect of the vision of the New Jerusalem in Revelation 21–22, positioning these messages as suspended between ‘what is’ and ‘what is to come’. The tree of life is an image that Revelation 22:2 draws from Genesis 2:9 and suggests a tree whose fruit gives life when eaten. The term paradise originates from the Persian idea of a walled garden in the king’s palace, but ‘paradise of God’ is consistently used in the Greek Old Testament to refer to ‘the garden of God’ in Genesis 2, reinforcing the link between the New Jerusalem and the Garden of Eden. One of the things achieved by the victory of Jesus, in which his followers are to participate, is the restoration of the good creation of God before the entrance of disobedience into the world.

Jurgen Roloff: According to John, the circle of those who overcome is by no means confined to martyrs, it includes others even though the reality of such overcoming is not clearly expressed in their lives. The content of the promise to those who overcome is portrayed with the image that points to the concluding vision of the book (22:2) and becomes comes completely understandable only in its framework: they may eat of the tree of life in paradise, which returns at the end time (Gen. 2:9; 3:22); thus, they share in the abundance of the salvation of the consummation.

"God knows well that when you eat of it your eyes will be opened and you will be like gods, who know good and evil.”

"Some years ago a learned man asked me a question of great importance; the problem and the solution which we gave in our reply deserve the closest attention. Before, however, entering upon this problem and its solution I must premise that every Hebrew knows that the term Elohim is a homonym, and denotes God, angels, judges, and the rulers of countries, and that Onkelos the proselyte explained it in the true and correct manner by taking Elohim in the sentence, 'and ye shall be like Elohim' (Gen. iii. 5) in the last-mentioned meaning, and rendering the sentence 'and ye shall be like princes.' Having pointed out the homonymity of the term "Elohim" we return to the question under consideration" (Guide for the Perplexed I.2).

like God, knowing. The Hebrew word for “knowing” is yōḏēʿa, a masculine plural participle. The meaning is ambiguous. On the one hand, the plural can be used as an honorific form for God, in which the given translation is legitimate.⁴⁸ On the other hand, it can be a countable plural, in which case the translation should be “you will be like divine beings, knowers of good and evil.” The latter meaning is more probable, since, after they eat of the forbidden fruit, the text says unambiguously, “They have become like one of us, knowers of good and evil” (lit., Gen. 3:22). In any case, the serpent makes God appear to be restricting them from full humanity.

like divine beings Hebrew ’elohim is a comprehensive term for supernatural beings and is often employed for angels.3 Any possible ambiguity inherent in the use of the same word for “God” and for “divine beings” is here removed by the plural form of the verb “know” (yode‘ei) and by verse 22 (“one of us”). As tractate Soferim 4:5(4) points out, “the first ’elohim [in this verse] is sacred, the second non—sacred.”

Robert Alter Translation:
"For God knows that on the day you eat of it your eyes will be opened and you will become as gods knowing good and evil."

Here is one perspective concerning Exodus 33:18:

The request of Moses to see the glory of Yahweh is effectively a request that Yahweh demonstrate the reality of his promise to be present, indeed that he prove his Presence once again, as he did before the solemnization of the covenant that has since been shattered. “glory” in this context is very close to a synonym for “face, Presence,” as the ensuing narrative shows. Neither term is intended to suggest “human features,” as Eichrodt (Theology of the OT 2:29– 40; cf. also Davies, “Glory,” IDB 2:401– 2; Westermann, Wort-Gebot-Glaube, 227– 49 and “,” THAT 1:801– 12) has shown.

It's worth reading Durham's comments in their entirety.

Posted by Edgar Foster at 6:33 PM No comments:

The post below is taken from the ABD. It is part of the entry for Elohim; we believe this blog entry conforms to United States Fair Use of Material for Scholarly or Educational purposes. 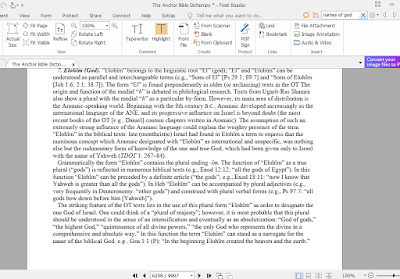 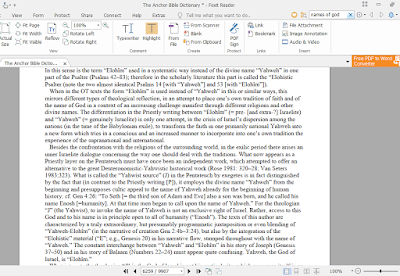 Social and Cultural Context of the Apostle Paul

The apostle Paul lived in the Greco-Roman milieu: he spoke and wrote in Greek while being a Roman citizen (Acts 22:28). Furthermore, Paul was a "Hebrew of Hebrews," belonging to the tribe of Benjamin (circumcised the eighth day), and he was trained at the feet of the Jewish rabbi, Gamaliel (Philippians 3:4-6; Acts 22:3). Paul's status as a Roman citizen, his upbringing as a Jew in a 1st century Greco-Roman world ultimately shaped his personality, writing style and way of communicating. Of course, Jehovah's Witnesses believe that Jehovah God also imparted special wisdom to this man by means of the holy spirit. As Peter wrote, "just as also our dear brother Paul wrote to you, according to the wisdom that was given to him" (2 Peter 3:15 LEB), that is, the wisdom was granted to him by God.

Like other people, Paul had his own idiolect and spoke and wrote according to a particular sociolect. All of these factors must be taken into account when reading Paul or any other Bible writer.

Ken Schenck has a project where he goes through the whole Bible in 10 years. I don't endorse everything he states or agree with him in all respects, but I find Ken's videos generally enlightening and sometimes humorous. Here is a video about 1 John 5.

https://www.youtube.com/watch?v=ZpZBbcvx0Qc&list=WL&index=98&t=0s
Posted by Edgar Foster at 9:25 AM No comments:

μιμηταί-nom. pl. sing. μιμητής (imitator, one who mimics with another) and the obj. gen. shows who should be copied. μιμηταί comes from the verb μιμέομαι, which means to imitate, to mimic. The nominal ending identifies the agent (doer) of an act (Rogers and Rogers).

The word μιμητής is a word used in classical times that means an “imitator, copier,”[1] as an actor who “impersonates”[2] or, in the bad sense, an “imposter.”[3] A word from the same root can mean a counterfeit. A good counterfeit is as close to the original as possible. The noun is not used in the LXX but the verb is found four times (Wis 4:2; 15:9; 4 Macc 9:23; 13:9) where people are called to imitate others but never called to imitate God. In the NT it occurs six times always in conjunction with γίνομαι, “to become,” and all uses are in Paul’s writings except one. Paul asks the believers to be imitators of him (1 Cor 4:16; 11:1; 1 Thess 1:6; 2 Thess 3:7, 9 [verb form]) as he is an imitator of Christ, and it is also used of believers imitating other believers (1 Thess 2:14; Heb 6:12).[4] Therefore, it suggests an imitation of a good role model. Only in this context Paul enjoins the believers to become imitators of God.[5] The genitive is an objective genitive. They are to become imitators of the God who in 4:32 dealt graciously in Christ by likewise acting graciously.

Posted by Edgar Foster at 10:48 AM No comments: