ESV: and you have made them a kingdom and priests to our God, and they shall reign on the earth.”

J.B. Phillips: "and we shall reign on the earth.”

Weymouth NT: "And they reign over the earth."

Grant Osborne (Baker Exegetical Commentary): 5:10. βασιλεύσουσιν: There are three readings for “they shall reign” here. The first plural βασιλεύσομεν is based on inferior readings (2432 idem et al.) and is unlikely. The other two have nearly equal manuscript support. The future βασιλεύσουσιν is supported by א P 1 94 1828 1854 et al., and the present βασιλεύουσιν is supported by A 046 1006 1611 et al. It is a difficult decision, because the present would probably be futuristic, “they are going to reign”; hence, it would have nearly identical force to the future. Due to the superiority of A and the others in 5:9, I tentatively side with the futuristic present here. Moreover, it is the most difficult reading, that is, a present force does not make sense, and so later scribes changed it to a future tense to make the future reign of the believers more evident.

Robert Mounce: Textual evidence is rather evenly divided between “they reign” (ASV) and “they will reign” (NIV), although the latter is favored both by the Nestle text (27th ed.) and the UBS text (3rd ed.). It seems unlikely that John is here referring to a present spiritual reign of believers.³⁶ The hymn of praise is not a cryptic reference to Christians as the true kings in spite of the apparent rule of the Caesars. The promise is that the church is to share in the eschatological reign of Christ and all that it will involve (2:26–27; 20:4; 22:5).

Mounce, Footnote 36: Even if βασιλεύουσιν is read instead of βασιλεύσουσιν, the reference is probably future, the verb serving as a futuristic present and imparting a tone of assurance (Moulton, Grammar, 3rd ed., 1.120). Krodel prefers the reading βασιλεύουσιν and concludes, “In short, the present tense, ‘they reign,’ also includes the future” (167).

Jon Morales: Christ, Shepherd of the Nations The Nations as Narrative Character and Audience in John's Apocalypse: 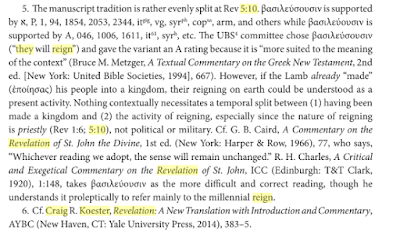 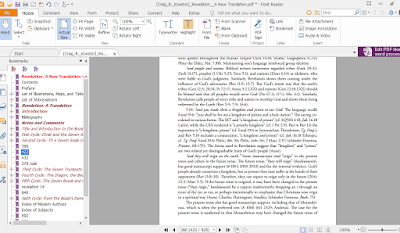 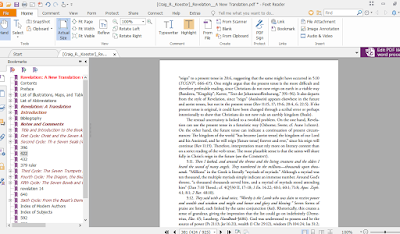 J.H. Moulton and the Greek Present of Past Action 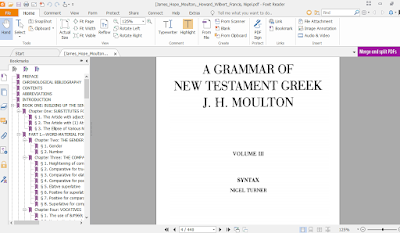 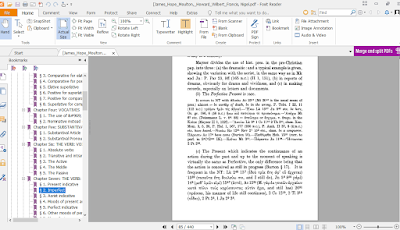 Posted by Edgar Foster at 8:37 AM No comments:

Thanks to Duncan for letting me know about the death of Larry Hurtado. Jim Davila provides a nice discussion of his work in the link above and illustrates the great loss that has about in NT studies. Despite theological differences with Hurtado, I express my condolences to Larry's friends and family.

Gesenius and the Objective Genitive in Hebrew

Gesenius on the objective genitive.

Use the key term "objective genitive."

διήνοιξεν aor. ind. act. διανοίγω to open. Prep. in compound suggests, “to open up wide or completely,” like a folding door (RWP). “To open the heart” indicates that the Lord caused her to understand (BAGD; EDNT) or that He caused her to have an open mind w. a willingness to learn and evaluate fairly (LN, 1:332).

Posted by Edgar Foster at 9:05 PM No comments:

How might we translate Galatians 1:13? I could be mistaken here, but it seems that the conative or tendential Aktionsart (kind of action) of the verb, EPORQOUN, probably results from its lexical, grammatical and contextual features (Wallace GGBB, 499). It is what Wallace calls the "affected meaning" of the verb. So as I understand conativity or durativity (etc.), these features are not determined by the translator or outside observer, but by context or lexico-grammatical factors.

Speaking to some of these issues, Donald Mastronarde (Introduction to Attic Greek, 114) has this to say about the imperfect indicative:

"The Greek imperfect indicative refers to action in the past which is incomplete (hence the name from the Latin for 'unfinished'), in progress, or repeated or customary. It corresponds to the English past progressive (I was sending), verb phrases with used to (I used to send), and in some contexts the English simple past (I sent)."

James Brooks and Carlton L. Winbery classify EDIWKON and EPORQOUN in Galatians 1:13 as examples of the Greek descriptive imperfect, meaning that the verbs describe what has taken place at some time in the past. However, they note that EPORQOUN "could also be interpreted as a tendential imperfect" (Syntax of NT Greek, 91).

Compare the tendential imperfect HNAGKAZON at Acts 26:11. In the final analysis, I agree that it is a judgment call in translating Galatians 1:13, but it seems to me that Paul did not lay waste or destroy the congregation. Rather, he tried to lay waste God's congregation.

Here are the rest of my notes on Galatians 1:13. These comments are not designed to be dogmatic but just represent one of my inquiries:

Galatians 1:13 (NWT, 1984) reads: "You, of course, heard about my conduct formerly in Judaism, that to the point of excess I kept on persecuting the congregation of God and devastating it."

Other translations read similarly, but NKJV says: "For you have heard of my former conduct in Judaism, how I persecuted the church of God beyond measure and tried to destroy it."

On the other hand, NASB translates the passage: "For you have heard of my former manner of life in Judaism, how I used to persecute the church of God beyond measure and tried to destroy it"

Notice that the latter portions of NKJV and NASB have "tried to destroy it" instead of "devastating it."

The reason for rendering Galatians 1:13 in this way evidently lies in the fact that EPORQOUN (a form of PORQEW) apparently is an "imperfect conative" (Zerwick); hence, "tried to destroy/make havoc of."

Walter W. Wessel (in Mounce's grammar) states that EPORQOUN in Galatians 1:13 is a tendential imperfect, expressing attempted action (BBG, 176). Paul did not really devastate the congregation of God, but only attempted to do so. Moreover, EDIWKON appears to express repeated action in the past (customary action), which explains the NASB's "used to persecute . . . "

Ralph Earle also writes: "The imperfect tense would suggest that Paul 'was ravaging' the Church and trying to destroy it, but that he did not completely succeed" (Word Meanings in the NT, 271).

With a ὅτι (hoti, that), Paul elaborates on the specifics of that “former way of life in Judaism.” First, he was “intensely persecuting the church of God and trying to destroy it” (καθ᾿ ὑπερβολὴν ἐδίωκον τὴν ἐκκλησίαν τοῦ θεοῦ
καὶ ἐπόρθουν αὐτήν, kath’ hyperbolēn ediōkon tēn ekklēsian tou theou kai eporthoun autēn). Both verbs are in the imperfect tense, the former because it is a durative idea—“I was persecuting”—and the second because it is conative—“I tried to destroy” (Wallace 1996: 551).
Posted by Edgar Foster at 9:10 PM No comments:

Why is it so important to avoid loving the world or the things in the world?

Some might reason that not everything in Satan's world is wrong. However, the world and its many attractions can easily distract us from serving Jehovah. Furthermore, nothing in the world is usually made to help us develop a close relationship with Jehovah; therefore, if we develop a love for things in the world, although such things may not be wrong in themselves, we are still on a dangerous course. (1 Timothy 6:9, 10)

Yet much of the world's content is corrupting and spiritually defiling. For example, think of how movies or television programs that glorify violence, materialism or sexual immorality might affect us. And what if we associate with people whose main goals are improving their lifestyle or cultivating business opportunities?

Could they possibly affect our spirituality, and cause us to put material concerns ahead of Jehovah's interests?

1 John 2:17 provides another reason to avoid loving the world. (Read)

Satan makes his system appear to be lasting and real. However, this world is temporary. It is passing away and so is its desire: nothing in Satan's world is permanent. If we remember that fact, we'll avoid being seduced by the Devil’s enticements.


Posted by Edgar Foster at 5:55 PM No comments:

"The heart is treacherous and desperate"

This segment has links with the preceding verses. The word heart (lēḇ) occurs in both vv. 9 and 10. The human heart is deceitful (v. 9) but Yahweh knows it (v. 10). Verse 9 was possibly a well-known proverb. So also was the first half of v. 11, and the mention of requiting each man according to his ways (v. 10) links with unjustly (lōʾ ḇəmišpāṭ) in v. 11. The three verses are thus linked together in thought. Underlying them all is a guarantee to Jeremiah that Yahweh knows all, assesses (ḇōḥēn, v. 10) all, and judges all. If the fruit of Jeremiah’s deed is good, he is in Yahweh’s safe care.
9–10 The heart of man (lēḇ) in the psychology of OT times refers frequently to the mind, the source of a man’s thinking and action.⁵ It is here described as deceitful above all.⁶ A picturesque translation is “The heart is rougher than anything and incurable; who understands it?”⁷ It is certainly a mystery to mankind, who does not understand (yāḏaʾ) it. Yahweh, however, “explores” or searches (ḥāqar] the human heart.

Again this is a ‘wisdom saying’, using a rhetorical question to describe the general nature of human beings. However, it fits in a prophetic context, since it emphasizes that no-one is without sin, and this applies to the prophet’s own time. This prophetic message of warning is in the context of analysing the nation’s situation. The people are 'incurably ill’ (see also 15:18). Only God knows what is really in people’s hearts, minds and thoughts, what are their deepest emotions. He gives them what they deserve. Judgment was deserved in Jeremiah’s day, and God also knew what his enemies had plotted against him (17:14–18). The word for [examine the] mind is literally ‘kidneys’ (see comment on 11:20).

Jesus Christ as the Intermediate Agent of Creation 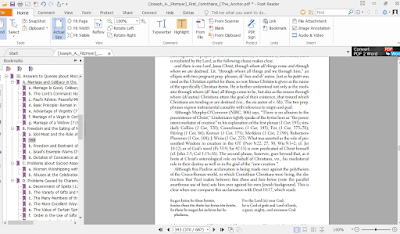 ἐκ may also be used to speak about "the efficient cause, or agent from which any action or thing proceeds, is produced, or effected from, or by" (Spiros Zodhiates).

The data would thus indicate that when ἐκ is applied to the Father's activities at 1 Cor. 8:6, it is describing His creative function, but Christ is the intermediate agent of creation.

In this regard, it would probably be worth one's time to reference the introduction of David Aune's three-volume commentary on Revelation. On p. CLXXIX-CLXXX of his introduction to volume I, Aune details the many uses of ἐκ in Revelation. The examples he gives for this Greek preposition are cases in which it signifies the action of a personal or impersonal agent: Rev. 2:9; 3:18; 8:11; 9:18. In my estimation, 2 Cor. 5:1 could be included as an example in which ἐκ describes a creation of God--a spiritual building in heaven.

As for διά, it seems difficult to construe the preposition as connoting that things were made by Christ in 1 Cor. 8:6 and Heb. 1:2; it is evidently more appropriate to understand διά here as suggestive of intermediate agency:

Dana-Mantey say that while "διά is occasionally used to express agency, it does not approximate the full strength of ὑπό."

"This distinction throws light on Jesus' relation to the creation, implying that Jesus was not the absolute, independent creator, but rather the intermediate agent in creation" (D-M Section 109).
Posted by Edgar Foster at 11:23 AM 29 comments:

One Volume Edition
Posted by Edgar Foster at 9:01 PM No comments: 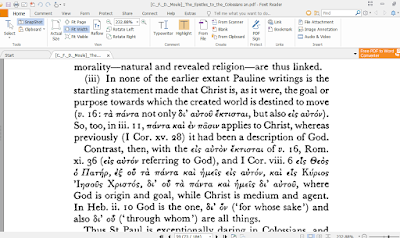 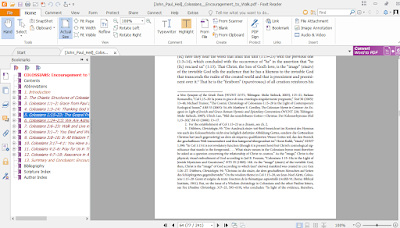 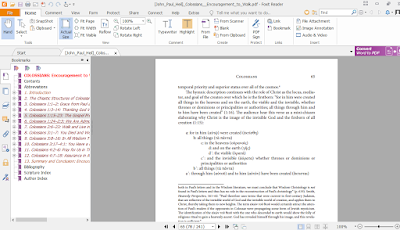 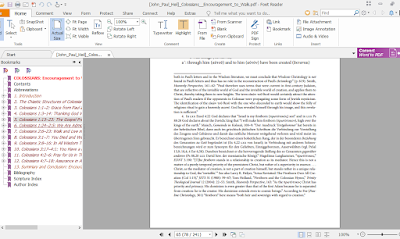