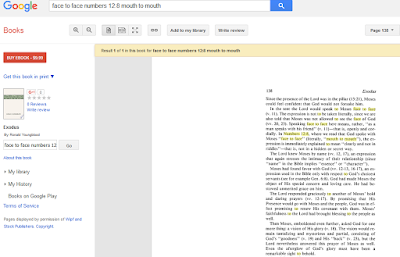 Are there examples of this for anyone else's communications?

If you are using windows 10 for screen shots you may find the snipping tool advantageous.

1) Do you mean examples of face to face communication? And in TNK or elsewhere?

2) Thanks, yes I am using Windows 10. I cropped this picture a long time ago, which may have been with Win 8, but I now use MS Photos. Not too crazy about it, but maybe I'll try the snipping tool as you suggested.

Yes the face to face. If a general phrasing I would expect other examples.

Numbers 12 suggests that Moses had a unique experience. The expression is repeated in other places about Moses and cf. Deut. 5:4; Judges 6:22.

Yes, unique experiences as per Judges 6:22.

But I think I have found what I was asking about:-

I'm glad you found it, because it wasn't clear to me if you wanted TNK references, which I thought you already knew, or references outside scripture that used the specific expression, face to face. The book looks good: I've read Orlov's piece: it's informative.

Found some more info regarding Hittite imagery of face-to-face. Not just people facing each other but literally face-to-face. Trying to track down pictures of the images & any context if possible.

Ezekiel 20:35 may be the most important usage of panim el panim.

"As this phrase is plainly to be understood according to its sense, and not according to the letter, so it is quite idle to attempt to locate “the wilderness of the people” as any material wilderness, as that of Arabia, or that between Babylonia and Palestine. The phrase must mean that wilderness condition of the people, scattered among the nations, in which the Lord will plead with them as He did with their fathers."

I agree that it is no specific midbar - IMO it is all/any midbar.

Definitely an important use of face to face, and it seems true that no specific midbar is mentioned.

There are lots of Hittite materials out there. One work is https://books.google.com/books?id=7B2y1lSFMFAC&printsec=frontcover&dq=hittite+and+the+hebrew+bible&hl=en&sa=X&ved=0ahUKEwiiu-OLoLrkAhVCiOAKHUK8B4EQ6AEINjAC#v=onepage&q=hittite%20and%20the%20hebrew%20bible&f=false

From Daniel I. Block's Ezekiel Commentary:

Yahweh will lead his people out into the desert. The expression desert of the peoples (midbar hāʿammîm) refers to a no-man’s-land, a land of wandering and death, through which many tribes and peoples pass but which none recognizes as a homeland. Isolated from the nations, Yahweh may engage his people without interference and distraction. This meeting is described as a face-to-face encounter between deity and people. pānîm ʾel- pānîm recalls the manner in which Moses used to meet with God (Exod. 33:11; Deut. 34:10). However, here the emphasis is not on the intimacy of the relationship between deity and human but on the directness of the encounter. This time there will be no cloud or mediator to shield Israel from the awesome divine majesty.

Isn't Block reading into the text by specifically calling it desert? Midbar has a wide range of environment.

It's true what you say, but BDB also gives the meaning "desert" for midbar, in some contexts.

V36 refers to the midbar in Egypt?

Yes, it probably refers to their overall experiences coming out of Egypt and wandering in the midbar forty years. Compare 20:38.

The chief point is that he will treat Israel in the same manner that he dealt with Israel during the Exodus/post-Exodus.

Another thought: reading all of chapter 20 helps one to appreciate Ezekiel 20:36 more. Note the multiple references to the wilderness in that chapter.

"At the same time the range of the visitation is extended so as to include not only the exiles in Babylonia but the Jews scattered among all nations; they, too, like those once made bond-slaves in Egypt, must be led into the wilderness, in order there to be subjected to the kingly judgment, in which God in person comes face to face with his people. But this new sojourn by Israel in the wilderness is given a depth and earnestness through this act of judgment which distinguishes it from similar pictures of the future to be found in Hosea and Deutero-Isaiah."