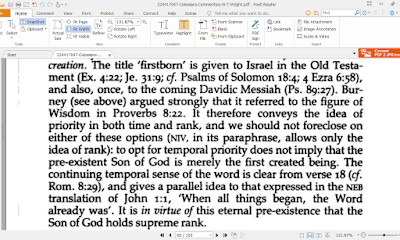 Broadie says that "it" is the correct way to translate all the way to possibly V14 of John 1.

Write is sat in the audience & is chairing the conference. He does not query or contest this in either speaker QA.

The ideas you are posting probably go back to at least 1990.

One would wonder what the point of this conference actually is & why N.T, Write would be an instigator for it?

If that is what Broadie says, I'm sorry, but Broadie is just mistaken. "It" is one way to render that part of the Prologue but not the only way.

Tell me how John 1:10 can only be rendered with "it" when it uses a masculine pronoun.

Wright's commentary was reprinted in 2002. I've read plenty of NT Wright and I seriously doubt he would retract/alter much (if anything) of what I posted yesterday.

The word Logos is also masculine in Greek.

Duncan, I don't think you can reduce Wright or scholars who have analyzed and written about John 1:1 as simply pointing to Colossians. That is not exactly what all Trinitarians are doing in this matter.

Broadie also points out that in the Greek the meaning of ἐγώ would have been ambiguous.

The neuter & masculine argument do not hold.

In french a cat is "she" & a dog is "he". If talking about a non specific dog I would say "it" in English but for a specific dog if I knew the gender I might say that this dog is a "she" of that cat is a "he".

Broadies research is philosophical. To correct myself, she was asking if "it" was a good translation & Gathercole said it was probably a better way to translate and the change to "him" would come somewhere between v11 & v14 but this has nothing to do with the gender of words but rather the context.

Its a presupposition to call the logos personal. At this point in the dialogue one does not know that as a possibility and interpretation of V14 does the rest. Even προς is ambiguous in light of personification language.

I normally don't try to make arguments based on gender. Compare Romans 8:16, KJV, "itself" for the holy spirit. But I see the unitarians trying to make a case out of Tyndale using "it" for the Logos, which is a possible rendering in some parts of the Prologue, but not in others, if one wants to stick with the gender-grammatical argument. In the past, on this blog, I've argued fervently against making gender arguments from Greek or Hebrew morphology. But if someone wants to insist that the neuter in John 1 indicates the Logos is personal, I like to point to other parts of the Prologue that use masculine pronouns and I remind my interlocutor that Logos is grammatically masculine.

Pneuma is neuter, parakletos is masculine, so what is the holy spirit? Ruah is feminine.

I also don't see how Gathercole overlooks the masculine word in 1:10. Compare also John 1:11 and how John speaks about "his own."

What I also said is that the word, logos, is grammatically masculine--not necessarily that the Logos is personal although that is my belief. And John uses masculine words to describe the Logos, not just neuter ones.

I am beginning to understand Tyndale's translation.

He translates as - he cam into his awn.
but - and the word was made flesshe, and dwelt amonge us, and we sawe the glory off it...

In Greek of the period how would one say "re-made"?

Seems like -remade would either be expressed by a noun or with some form of the verb poiw. Compare http://www.perseus.tufts.edu/hopper/text?doc=Perseus:text:1999.04.0057:entry=poie/w

I'm reminded of the ancient Stoics, who believed in worlds being recreated.