Book Review of "Arnobius of Sicca: Religious Conflict and Competition in the Age of Diocletian"

The groundbreaking study written by Michael B. Simmons has advanced our knowledge of Arnobius and his theology. Despite some problematic elements such as the claims made about religious conflict and competition, Simmons' investigation clarifies Arnobian thought by attempting to establish a socio-historical context for Adversus nationes. Simmons indicates that "Saturnian theology" possibly informs the Arnobian concept of God. The terminology that he uses refers to the doctrine of God that prevailed in Roman North Africa during the age of Emperor Diocletian (284-305 CE). Saturn was the chief god of North Africans and his cultus revolved around agrarian matters like crops, farming implements and weather control.

Certain factors that lead Simmons to adjudge that "Saturnian theology" informs Arnobius' theology are portions of Adversus nationes that disputably attribute Saturnian epithets to the omnipotent deity of Christianity. One readily encounters the terms genitor, pater, dominus and frugifer in Arnobius. Of course, this linguistic phenomenon does not necessarily confirm that the cultus of Saturn functions as a backdrop for Arnobius' thinking about God. Nonetheless, Simmons considers it a strong possibility.

While pagan concepts may shape the Arnobian understanding of divine fatherhood, it seems more feasible that polemical strategy or ignorance respecting certain doctrines as well as situational context influences his doctrine of God and Christ. Simmons' work is documented thoroughly and well-written--it has proved to be indispensable for my studies of the Latin Patristics. 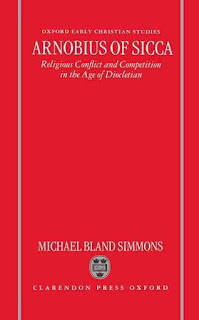