This book contains selected papers from a 1991 conference sponsored by Wycliffe Bible Translators. Its editors are David A. Black, Katharine Barnwell and Stephen Levinsohn and there is also a foreword by Eugene Nida. Some of the essays include: "Reading a Text as Discourse" (J. P. Louw); "Constituent Order in Copula Clauses: A Partial Study" (John Callow) and "A Tale of Two Debtors: On the Interaction of Text, Cotext, and Context in a New Testament Dramatic Narrative (Luke 7:36-50)" by Ernst R. Wendland. There is also an essay by the accomplished scholar Randall Buth that is titled "OUN, DE, KAI, and Asyndeton in John's Gospel."

The second essay, by Longacre, demonstrates the importance of not just counting verbs or words, but also weighing them in light of the overall discourse. Through a fairly sophisticated analysis of John's discourse in the first epistle of his corpus, Longacre discerns the hortatory nature of John's epistle and its overall theme or purpose in relation to first century readers. Overall, I found this book to be educational and useful for those wishing to understand or rightly exegete Holy Scripture. Of course, there are points at which one might disagree with some explanation of a particular verse or even take issue with the methodology employed by those who contributed essays to this book. Nevertheless, I think that this work deserves to be read and pondered. Especially is this the case with the opening essay of the book written by Louw. 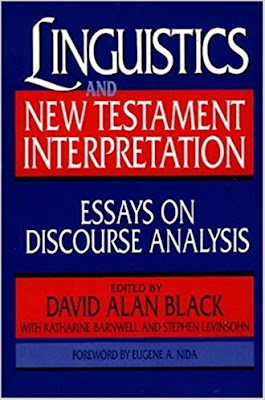