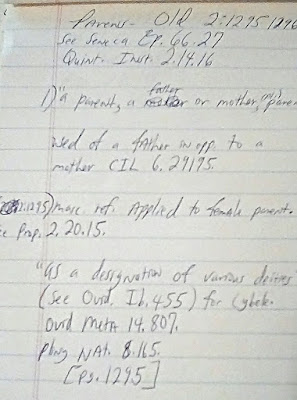 Thanks, Duncan. The use in James is the verb, pareo; parens there is the present participle form of pareo. But parens in my post refers to the noun, meaning parent, progenitor, etc.


Is this quote in error?

Duncan, I see that you found the answer, but just to clarify--I was saying that parens can be a noun which refers to a parent or the same latin form can function verbally, but it then has a different meaning and furthermore, parens as a verb is a participle. Finally, pareo is the first principal part of the verb and parere is an infinitive or the second principal part.

So it is parent a parent. Looks like I was also getting it confused with pater:-